As viewers move about the room, they are detected by proximity sensors and their movements influence the soundscape. The soundscapes are composed from collaged elements, including field recordings from forests around Berlin, the streets of Berlin, field recordings of household objects, as well as archival advertising, historical sound recordings, voices and studio-generated elements.

Each composition level has an accompanying sound-reactive video theme. The video themes are abstract visualizations or collages of the levelʼs theme, functioning as color field or light works..

The viewers movements about the room play a role in the composition, triggering new sounds in the foreground and background, altering the soundscape. The use of four projectors, one on each wall decentralizes the viewersʼ focus and emphasizes the quadratic nature of the composition.

The general theme or concept for the composition is an exploration into the individual role that one plays within society, an examination of the idea that each member of a society steers the outcome through their individual actions. The themes for the levels are derived from different aspects of western society and group behavior. Additionally, in some cases number symbolism is used as a structural device.

Level 0: Null is Not Alone.
The natural state. Nature without a human observer. Sound and imagery reflects a realistic depiction of nature, consisting of field recordings from Berlin forests and accompanied by projections of nature scenes.

Level 1: One sees only reflections.
A person has entered the room. Footsteps become audible in the sound field as the viewer moves about the room while the natural environment from the previous stage has become altered and abstracted. The sound and visual environment has become a depiction of itself, representing a tendency to rationalize and categorize experience, thus removing oneself from the here and now in favor of a detached, rationalized relationship with oneʼs surroundings. This level addresses the question of “being”.

Level 2: Two combine.
Two people tend towards discourse. The natural state becomes further abstracted, as focus shifts from surroundings to discussion of the surroundings. Movement within the room through the sensors creates dialogue in the audio composition. This level addresses the question of “the other”, as well as an examination of discourse in general.

Level 4: Four Raise Posts.
The number four may represent stability, structure and order, the building of a house, or a city, as well as being the smallest number from which opposing teams can form. Audio compositions collaged from Berlin city streets fill the room and movement within the sensors adds to the frenzy of traffic. Occasionally, an abstract composition plays that represents a division of four people into two teams and the tension and conflict that can ensue. The viewersʼ movements within the proximity sensors for this composition adds more “friction” and unease to the sound field.

Level 5: Five covers Heads.
As the fifth person enters the room, a metaphoric roof forms. The group has chosen a cover that will protect it and guide it. Within this stability and shelter, the group exchanges individual identity and self-determination for collective group behavior. However, the viewers' motions in the proximity sensors betray an active role and participation in this entity. This protective entity or power structure throughout western history has been the church, and the theme for this level consists of collages derived from recordings of church bells, creaking wood floors and horses.

Level 6: Six Sell.
As the sixth person enters the room, the composition level increases to reveal a new stage: The broadcast. A broadcast is an attempt to win minds, to convert, to conform, and to encourage guided action of one sort or another. As the viewers move about the room and are registered by the sensors, they switch channels, and steer the messaging, but the end result is the same: endless messages. The theme of this level is inspired by some of the most persuasive broadcasting from modern times: marketing.

Level 7: Seven Fit.
The logical result of broadcasting and marketing, level 7 represents consumption. As the viewers move about within the proximity sensors, they steer metaphoric shopping carts and are scanned at the register.

Level 8: Eight Supply.
The eight person enters the room. A doubling of four, stage eight represents a new stability: The filling of orders, the endless drone of supply fulfillment and the cycles of machines. As the viewer moves within the sensors they contribute to a symphony of production. This composition theme is the logical result of consumption.

Level 9: Nine Inquire.
With stability comes paranoia, inspired by the fear of the loss of this stability. Security is required, watchful diligence from all of the members is demanded. As the nine viewers walk within the sensors, the horizon is scanned for suspicious activity. The sound field consists of collages of espionage-themed soundscapes and nefarious broadcasts.

Level 10: Ten Acquire.
The system requires energy, and wars throughout history are triggered by quests for acquisition. Pre-emptive or defensive, the scene on the ground during a war is one of terror. The viewers walk about within the sensors and consciously or not, participate in this war, symbolically launching the grenades while their footsteps flee in terror. Is one the attacker or the victim, or both? 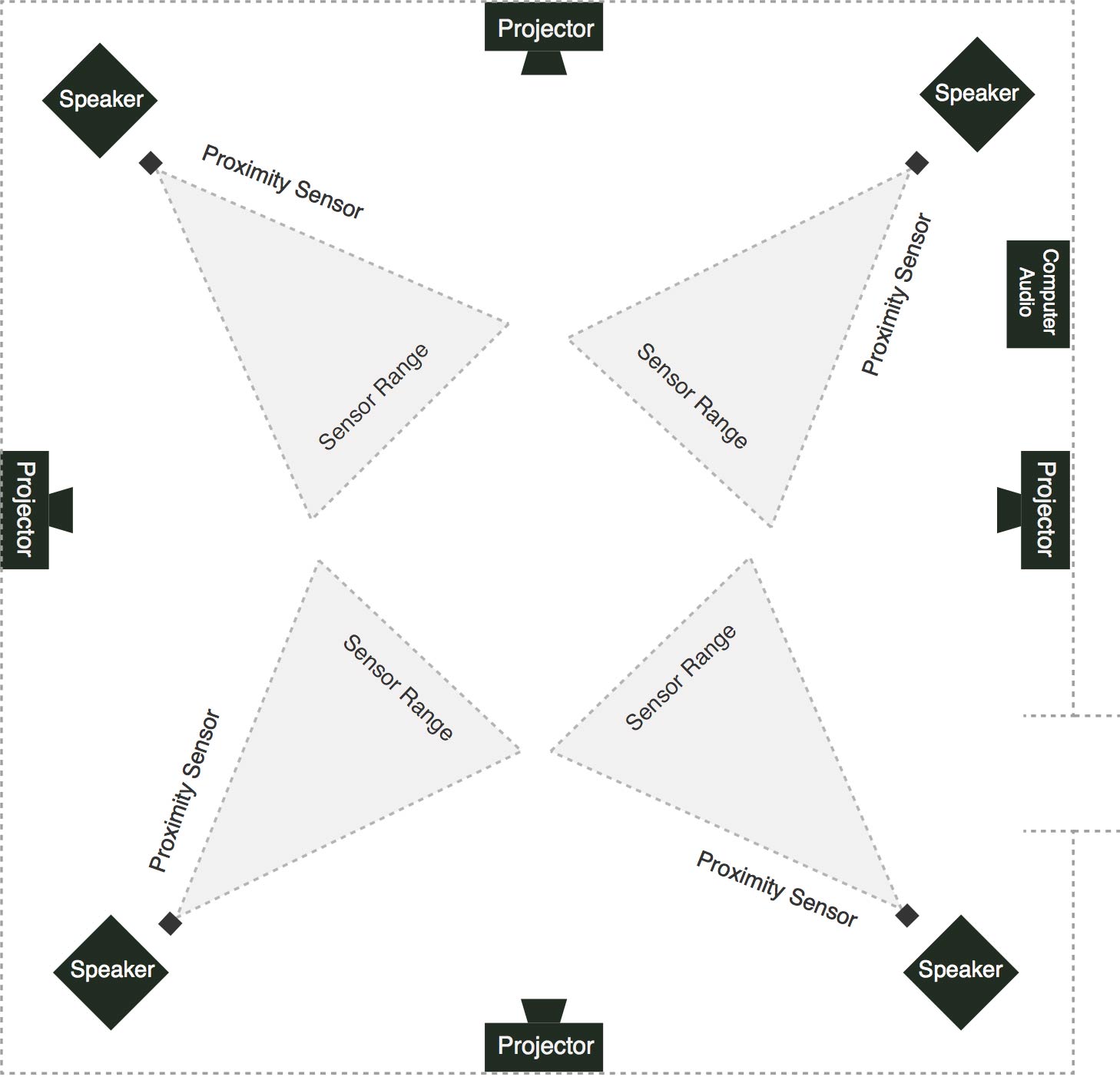